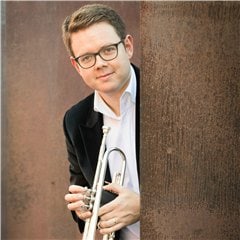 Winner of the Prague Spring, Ellsworth Smith, Girolamo Fantini and Lieksa international trumpet competitions in 2016/2017, Huw Morgan is internationally recognised as one of the most sought-after brass players of his generation. He combines a flourishing solo career with his role as principal trumpet in the Sinfonieorchester Basel, and as a founder member of London-based ensemble, Septura.

Highlights in recent seasons include concerto appearances with the BBC National Orchestra of Wales, Northern Sinfonia, Irish Chamber Orchestra, Royal Flemish Philharmonic, Hamburg Camerata and European Union Chamber Orchestra, working under conductors including Tortelier, Herreweghe and Zehetmair. Huw has also featured at numerous international festivals: Cheltenham, Mecklenburg-Vorpommern, Kaposvár, Sounds New, WASBE, Trømso and Rainbow21 (Tokyo), broadcasting regularly on both national radio and television. Among his solo recordings, Huw can be heard as the featured trumpeter on the soundtrack to the BAFTA-nominated film, Me and Orson Welles.

In recital, Huw performs at the Wigmore Hall, Purcell Room, Bridgewater Hall and Sage Gateshead. A passionate exponent of contemporary music, he has commissioned and premièred works by Leif Segerstam, Eric Ewazen, Paul Max Edlin and Jonathan Harvey, and was the featured soloist in the first performance of ‘Only Heavenly Music’ from Karl Jenkins’ Stella Natalis, conducted by the composer in his 60th birthday concert at the Wales Millennium Centre.

Following his success as Brass Winner of the BBC Young Musician of the Year, Huw has gained renown for his prize-winning appearances at many of the most significant international competitions, including Porica (Italy), Jeju (South Korea) and Only Brass (Belgium). In 2005 he became the youngest ever winner of the International Trumpet Guild’s prestigious Solo Award, and in 2010 won both the Brass Prize and Wind Section Award at the Royal Over-seas League Competition.

Born in South Wales, Huw won a scholarship to study with John Dickinson and Murray Greig at Chetham’s School of Music, and latterly continued his education at the Royal Academy of Music under the tutelage of Professor James Watson, Mark David and Robert Farley, where he graduated with first-class honours and is now an Associate. Huw is currently a student of Professor Frits Damrow at the Zürcher Hochschule der Künste (ZHdK).