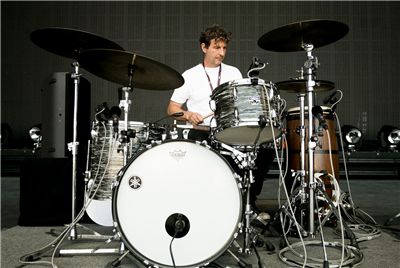 Drummer Adam Topol has been on some remarkable musical journeys, including a recent world tour with Jack Johnson, with whom he's played since the late 1990s. But he's as musically adventurous as he is well traveled: As a solo artist, collaborator, and sideman, Topol has explored an atlas-full of world music styles, with an emphasis on Cuban and Jamaican grooves.

Adam's fascination with the drums began early. "I think an instrument sort of picks you," he says. "You don't pick it. I remember being a kid, back in Lake Tahoe, and seeing a guy setting up some drums. It was magic to me, watching the process of the stands being unfolded, the whole drum set built in front of you, and then someone sitting down and playing them."

An encounter with one of the world's great rhythmic cultures turned things around. "A friend talked me into a two-week study trip to Cuba," he explains. "I didn't know the first thing about Afro-Cuban music. But there was a real tradition, a real spirit there. People just sat down and played--it was their life. The ones who knew the most rhythms were the coolest, and some of the most respected drummers were the oldest ones

Adam embarked on an entirely different musical adventure when he began playing with Jack Johnson in 1999. "We were gigging around L.A. and Santa Barbara, just clubs and stuff," he says. "But there was always a crowd, and you could feel an energy there with his music, and his ethos, all the stuff he's involved in."

As word spread, Topol and his bandmates found themselves on the road to fame. "The first place that blew up was San Diego," he remembers. "We did a gig at the racetrack, and when we showed up, there were like 20,000 people. We were in a minivan, and they wouldn't let us in--they didn't know it was Jack Johnson. All of a sudden it was like backing Elvis Presley or something! You'd see people screaming, and it started from there. The music's so incredible, and so is the message."

He's just as happy with his oak kit: "I've used those drums a lot at this point. I backlined Yamaha's oak kits over three or four years with Jack and other artists. They always sound incredible. The nice thing about Yamaha kits, particularly the oak drums, is that they're really consistent. They all sound good."

Different woods handle different frequencies better, Topol observes. "And I think that's one of the cool things Yamaha keys into. I notice a lot of the Yamaha artists mix up the woods. Like at Bonnaroo, we got to play right before Pearl Jam, and I noticed Matt Cameron had an oak bass drum and birch toms. Wood definitely has a lot to do with it. It makes you respond a certain way, play a certain way."

Topol also had the opportunity to create his own snare at Yamaha's facility in Japan. "It was amazing," he says. "I brought in a Meters record and said, 'I want it to sound like that.' And they made me a snare that sounded like that! Seeing the whole process, hand-picking the wood, putting it in the machine, rolling on the color and picking out the hardware--it was the experience of a lifetime!"

Though Jack Johnson is currently on hiatus, Adam is still on the go with other recording and touring commitments, including Culver City Dub Collective, a dub/ska collaboration with the grandson of actor Franchot Tone. "We opened for Jack on the last half of the Sleep Through the Static tour," he says. "I'm also going back on the road with a singer-songwriter named Mason Jennings, who's on Jack's label, Brushfire Records. And I just finished two more tracks for a new Piers Faccini record. I think I'll be busy until next year!"